Rinkiya ke papa is a song by the famous Bhojpuri singer ‘Manoj Tiwari’ which was released on Apr 3, 2012 as a part of the Bhojpuri song album ‘Uparwali Ke Chakkar Mein’. The song immediately was on the top of the charts particularly in regions of Bihar, UP and Jharkhand due to the popularity of the singer.

The song has over 28 million views so far on YouTube.

Several years after its release, the song again got back in trend during 2018 when meme creators started using the funny lines of the song to create memes.

Mostly used as ‘Rinkiya ke papa’ or written as ‘He-he-he has deni Rinkiya ke papa’. The line from the song is used to mock any given situation and turn any particular situation into a hilarious one.

Meaning of the meme

The lyrics of the song translates to “Father of Rinki got slapped, yet there were sounds of laughter”. So, it is used in context of two parties, in which one is getting slapped and the other is taking pleasure out of it. Almost, all the video memes were made using the same idea.

Also, because of the song’s quirky lyrics and beats, it became a common joke to refer to this song to be too good (in a sarcastic way). Since, such songs are considered cheap and thus do not really appeal to the masses. And are also played during the time when you want to have ‘cheap thrills’.

Since the song gained massive popularity and was also recognized by meme makers, by 2018 various versions of the song started surfacing on social media. They were basically mash-ups of the song edited to created funny videos. Various clips from movies, political speeches and web series were compiled with ‘rinkiya ke papa’ playing in the background to form a matching sequence.

A number of YouTube videos in form of memes appeared on this platform after the increasing popularity of Rinkiya ke papa memes.

A YouTube channel by the name of Bk-Chod Brother’S uploaded a meme on 15th Feb, 2018. This meme mash-up featured a mix of – Arvind Kejriwal getting slapped, Modiji laughing in response and Ranveer Singh as Allaudin Khilji lip syncing on the lyrics of the song Rinkiya ke papa. The video is one of the most popular video meme made on the song till date with 2,301,479 views so far.

The song Rinkiya ke papa was also used to create a meme version which had clips form the movie ‘Koi Mil Gaya.’ The lead actor of the movie ‘Hrithik Roshan’ is shown slapping one of the characters in the movie, which is synced to the lyrics of the song. The video further matches the steps from the song ‘It’s magic, It’s magic’ to the beats of Rinkiya ke papa.

Another hilarious version of the song was uploaded by a user on YouTube on Jul 17, 2018. This 29 sec clip was a mash-up of video picked up from the immensely popular HBO series ‘Game of Thrones’, where the character Tyrion Lannister slaps Joffery and the song is aptly synced in the background where Tyrion is shown dancing and laughing throughout. The meme video also got major popularity.

Do Check Out: Dank Memes, What You Need To Know About Them

Another meme video featuring the song Rinkiya ke papa was uploaded by a YouTube channel sab kuch hai re baba that showed a video from parliament where Rahul Gandhi  (Congress) was shown saying things which he directed to the PM of India, Mr Narendra Modi. His speech was immediately mocked by everyone present in the room. In the later part of the video, the response to his speech was edited by placing the song ‘Rinkiya ke papa’ as PM Modi laughed at his claims along with many other politicians.

On Aug 4, 2018 another meme version of the song was uploaded on YouTube by a user called Ankit Choudhary. This video was a meme made on the WWE theme where the fighters are shown grooving on the beats of the song. As the song proceeds to the line ‘Chtatt deni mar delen kheench ke tamacha’, the WWE fighters are shown slapping , followed by John Cena laughing hysterically.

The video has 19k views so far.

This video was published on Aug 4, 2018. The video complied various stage performances of Justin Beiber dancing and lip synced the video clips with the song Rinkiya ke papa along with his dance steps. The video soon went viral and has received around 133,759 views so far.

Another version of the same song was uploaded on YouTube by Choke Studio on Aug 10, 2018. This, however, wasn’t a cover of the song. It was actually a hilarious parody and tribute to the song and the singer of the song. This video too went on to gain around 1.8 million views.

The song became the first Bhojpuri track that went on to gain popularity across the globe. A Nigerian singer who goes by the name ‘Samuel Singh’ uploaded the Rinkiya ke Papa (EDM Cover) on Dec 28, 2018, by the name | Prod by King Flame on YouTube. The cover song also was highly appreciated and has gained around 5.9 million views.

The memes on Rinkiya ke papa started circulating in India around the month of May and June 2018. The song was used in existing templates too. For example, the drake meme was modified by replacing it with two song choices, ‘Rinkiya ke papa’ being Drake’schoice.

Soon, Indians started using the song as the beacon of India(sarcastically) and used in on various memes. . 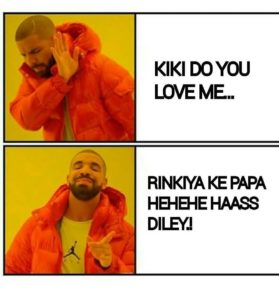 Hillarious: Best Mirzapur Memes You Should Check Out

A meme was also uploaded with the same article that explained the context in a short form.

A Facebook page called ‘Tharki mera dost’ uploaded a meme on Rinkiya ke papa with the context of KBC, where the singer of the song ‘Manoj Tiwari’ is shown playing the game and wants to phone a friend. When the host ‘Amitabh Bacchan asks him about what his friend does, he says ‘Hi hi hastey hai’. Amitabh immediately understands the person he needs to call. The meme explains the situation in a funny way. 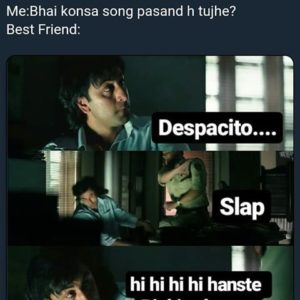 The meme is already dead and not used anymore to create memes. However, the song’s popularity is still there and is often played to make situations awkward.