Skip to content
Indian-memes PKMKB: Meaning And The Complete Meme Wars Info Between Indian And Pak

PKMKB is an acronym for, ‘[email protected]@n Ki Maa Ka Bh*[email protected]’. It is an abusive phrase used to describe the aggression and hatred towards terrorism and Pakistan. In this context, the word PKMKB is used to propagate the collective boycott of Pakistan and the fact that it supports terrorism.

Meaning of the meme

The term PKMKB can be loosely translated to an expression of a wide cunt. It can be literally translated to, ‘[email protected]’s mother’s smelly cunt’. Urban dictionary also defines the term in somewhat similar context. However, it describes Bhosda (which is an Indian abusive term) as wide cunt.

Netizens started using the hashtag PKMKB in early May 2018 in context of cricket where fans were trying to mock the Pakistani cricket team. But it again caught hype from 14th Feb, 2019 after the recent Pulwama attacks which was done by a group of terrorists who worked under Jaish-e-Mohammed group.

Since, the leader of the group was responsible behind the planning and had faced no issues staying in Pakistan and plotting a terrorist attack on India, people freely blamed PAK for the whole ordeal. Hence, the term was coined and soon went viral.

Spread of the hashtag PKMKB

On 24th May 2018 a Twitter user Sandpaper Convict @Modern_Fraudman, while replying to another twitter user in relation to cricket used the term #PKMKB for the first time. The reply was an image of Putin with the caption Pakistan ki maa ka bh**da, along with the caption Lol we are celebrating #PKMKB. 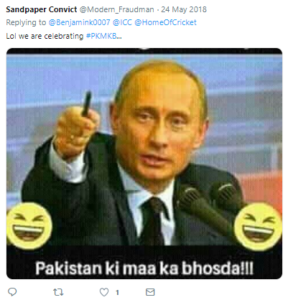 Following the trend, another user called THAKURसाहब@Amanproudhindu in regards to cricket mentioned a Pakistani fan of Virat Kohli who supported the #PKMKB and posted an image of Rahat Fateh Ali Khan singing Pakistan ki maa ka bh**da on 8th June 2018. 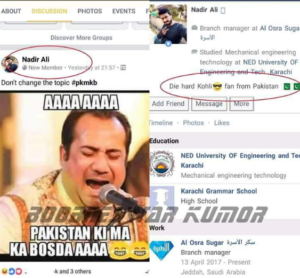 However, the real trend of commenting PKMKB on any random post appeared after the Pulwama attacks that happened in Kashmir, resulting in the death of 40 army officials in a terrorist blast on 14th Feb 2019.

On 15th Feb 2019 a Twitter user uploaded a short poem describing the current state of Indians and their outrage in regards to the terrorist attacks on the army. The poem described the anger and aggression along with the hashtag PKMKB.

Another user called Pratik Sharma‏ @mr_sharmaji9, uploaded the first post which asked sparked the trend to comment PKMKB on any random post, just to portray the support towards boycotting Pakistan and terrorism.
The tweet requested everyone to comment on PKMKB in the comments with a notion to reach 1 million comments in 10 days. The caption of the post read, ‘Extremely saddened to hear of the terror attack in Pulwama. My deepest condolence, strength, and courage to the families of #CRPFJawans. #RIPBraveHearts

Extremely saddened to hear of the terror attack in Pulwama. My deepest condolence, strength and courage to the families of #CRPFJawans. #RIPBraveHearts

Use of PKMKB in memes

A few Twitter users shared memes that caught wide attention. One of the most common memes that you would find circulating on social media platforms was by a user called Neha Goswami‏ @Nehagoswami0722. On Feb 19th,2019 she uploaded a meme with the caption “PKMKB has a separate fan base.”

The image was an old picture that showed the time when the Pakistani army surrendered to India in 1971.

#PKMKB👈 this hashtag has a separate fanbase😂…. pic.twitter.com/DhRw9imhCw

Also Read: What Are Indian Memes? How To Understand Them?

However, on 26th Feb when the Indian army destroyed the terrorist camps in Pakistan, the trend of #PKMKB went on to be used as a celebratory hashtag and not in the previous context of hatred.

On 27th February, Pakistan claimed that it had captured two pilots after shooting down two Indian jets over Pakistani airspace. India verified that only one MiG-21 had been lost and also demanded the release of the pilot. India then claimed to have shot down a Pakistani F-16, which Pakistan denied.

Since the attacks, a lot of tweets circulated mocking Pakistan that portrayed the bravery of the Indian army. A user Dr.Dermat  ?‏ @Dermazone_ uploaded a meme puzzle on 25th Feb asking people to complete the sentences which were actually in a picture format. The caption read,’Can you complete the sentence’

Pakistan later clarified that only one Indian pilot, Abhinandan Varthaman, was captured, and he was subsequently released on 1 March.

Meanwhile, netizens kept posting tweets and memes with the #PKMKB and saluted the wing commander for being strong and not revealing any details to the Pakistani army.

Following the release of the wing commander, a user Ajit Boppanalli @boppanalli shared a tweet on 3rd March that showed pilot Abhinandan Varthaman undergoing medical tests, where his vitals on the monitor display the full form of #PKMKB on the monitors. 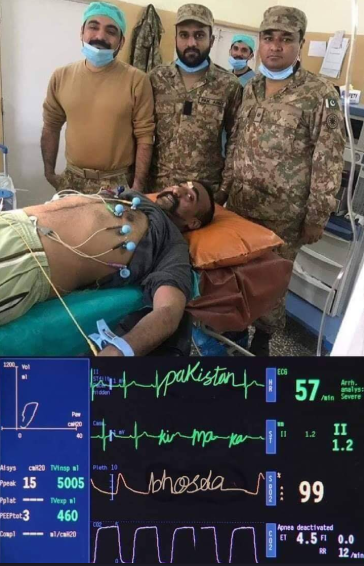 On 17th Feb, a Facebook page Alia vs Pappu Jokes which has over 3,263,259 followers, uploaded one of the memes that mentioned the PSL teams in a different version. The caption, of course, was #PKMKB and the post got over 4.4K likes, 312 comments, and 645 shares.

A Facebook page called BabaChu which has over 1,660,572 followers, uploaded a video on 19th Feb, 2019 which was a clip from what seems like a rally against Pakistan. The video showed an uncle in a striped T-shirt shouting out loud the full version on PKMKB on top of his voice.

The video went viral and has received over 76,398 views so far, along with 2k comments and 633 shares.

Another page called Video nation uploaded a video that widely showcased the full form of PKMKB, unlike the short version of #PKMKB that people were using to comment on all kinds of posts. The video gained a lot of attention and got over 63,969 views,845 likes, 549 comments, and 499 shares.

Another Facebook page Meme Central which has over 58,095 followers, uploaded a meme on 27th Feb that related cricket with the situation in Pakistan. It was raining sixes in Bangalore during the ongoing cricket match while it was raining bombs in Pakistan at the same time. The meme has over 510 likes and 56 comments.

Did You Know: Importance Of Memes In Marketing

Several fan pages and closed groups were also made under the name PKMKB.

Among the various PKMKB pages, one page did stand out. On a Facebook page PKMKB uploaded a video meme that shows an African shooting a video where he asks people in the background where they are from.

The people who are from India are welcomed and as soon as a Pakistani guy says,’Pakistan’, the guy replies with a blunt,’ Get outta here’ comment.  This video went viral and was reshared a lot of times.

The hashtag PKMKB became so popular that a user made a song for it. PKMKB song was uploaded by a user Deepak Raj published on Feb 23, 2019. The video has over 23,413 views and 957 likes so far. 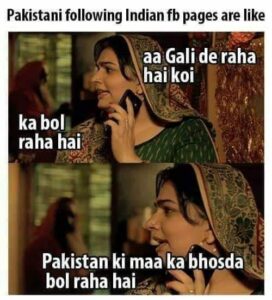 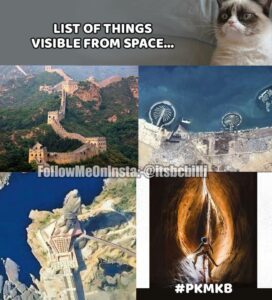